Management Material™ is based in the world of Corporate America, where no project is too outrageous and no excuse to get out of working too ridiculous.

It’s a vicious cycle of management creating unrealistic projects for their indentured servants…uhh, employees. Then those employees unable to weasel their way out of the horrific projects eventually find themselves completing them. With that kind of recognition, before they know it, the poor souls find themselves… 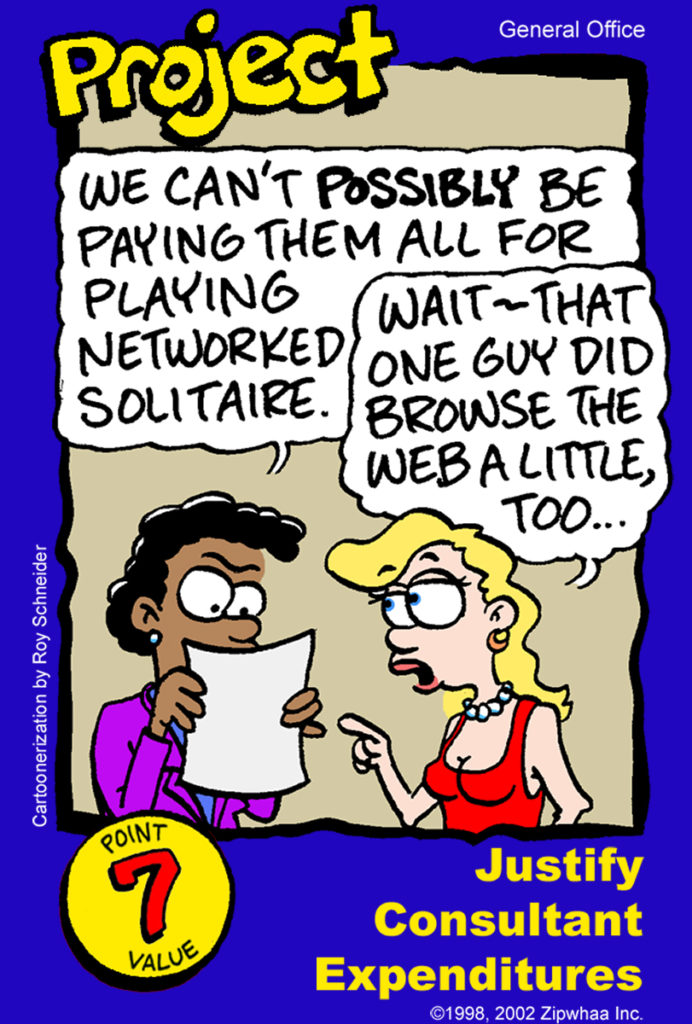 These are the horrific tasks that Management has cleverly devised in order to test the employees, and determine who is worthy of joining their dark ranks.

The Point Value, located in the lower left hand corner, shows how challenging Management believes this project to be. Collecting 30 of these points shows that you are worthy of being Management Material. In other words you lose. 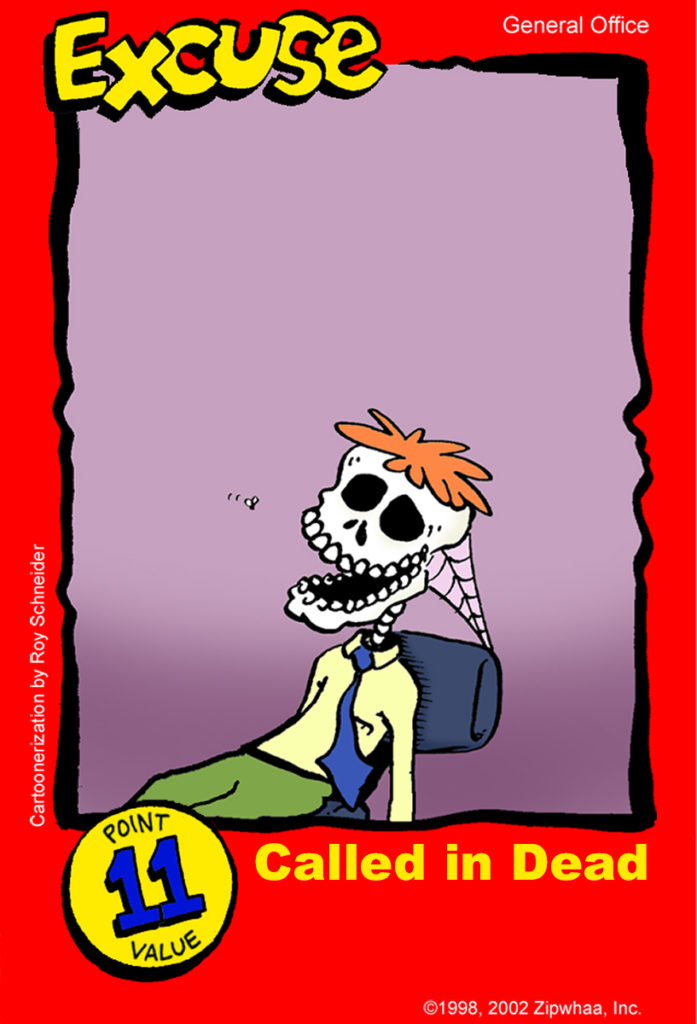 These are the only bastion of sanity standing between you and the abyss known as Management. You will try every sorry story, pathetic claim, and lame excuse to avoid the watchful stare of Management. Sound familiar yet?

The Point Value, located in the lower left hand corner, determines the effectiveness of your plea for mercy. If the total point value of your excuses is equal to or greater than the Project Point Value, then you will be spared for now. 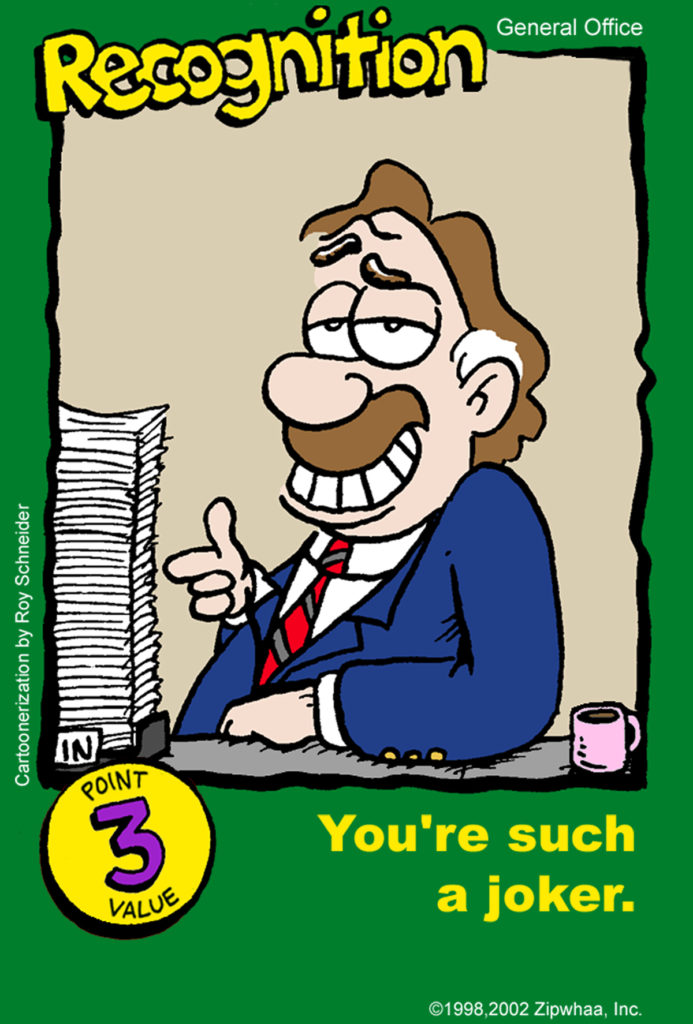 Even when you are trying your best to avoid work, your boss always manages to praise you at the wrong time. Recognition cards are used against opponents to make it more difficult for them to excuse themselves from a project.

The Point Value located in the lower left hand corner is the level of praise that the boss has so graciously imparted onto you. The Recognition Point Value is added to the Point Value of the Project, making it more difficult. 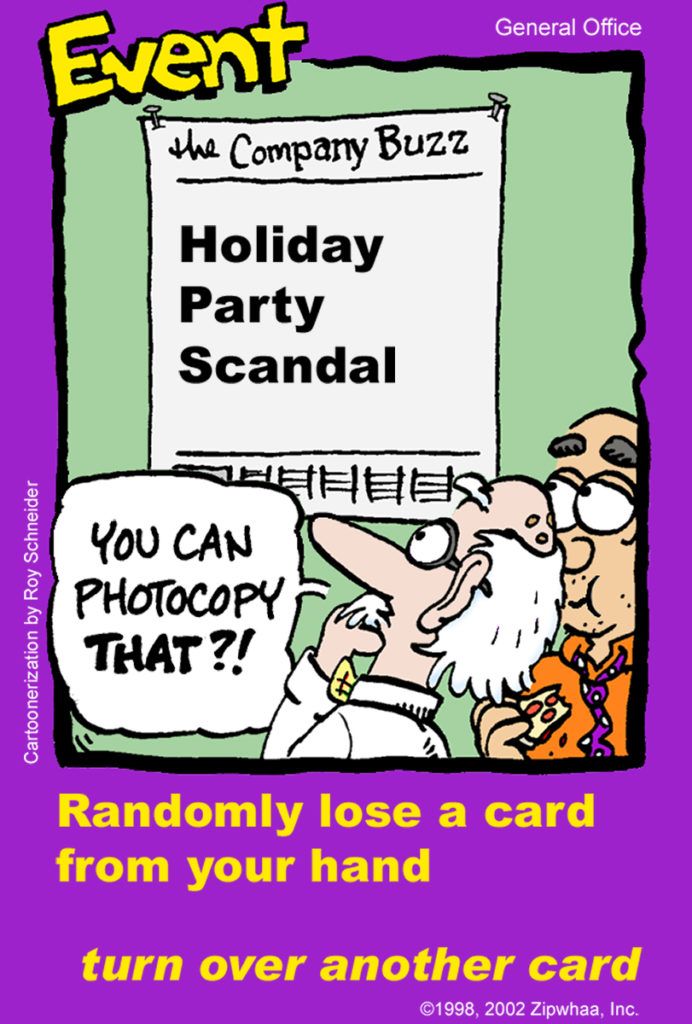 These are the cosmic forces that randomly wreak havoc throughout the corporate world. Things such as Mergers…Stock Splits…Legendary office parties, all have unpredictable effects on the work place.

Separate the cards into two piles. 1) The Assignment pile, consisting of the Project and the Event cards. 2) The Resource pile, consisting of the Excuse and the Recognition cards. Shuffle each deck and deal out 5 Resource cards to each player. Decide which player starts by Rock/Paper/Scissors, long division contests, dice throwing, mud wrestling, or whatever works best for you. The winner gains initial control over the Turn Marker, making them special.

Take control of the turn marker to let everyone know it’s your turn and you’re more special than they are. Draw 2 cards from the Resource Pile. There is no limit to your hand size. If you are able to hoard Excuses, more power to you. Turn over a card from the Assignment Pile. 1.If it is Project, weep internally, and then try to excuse yourself out of it. This is done by playing one or more Excuse cards so that their total point value either equals or exceeds the Project point value. 2. If the card turned over is an Event, read the card and follow the instructions. Once completed, draw another Assignment card. Once the Project is completed it goes on your resume and sits in front of you counting in your point pool. The Turn Marker is then passed on, and the next person begins a new round. If the completed project puts your point pool at 30 or more, you are out of the game. Play continues until only one cunning weasel has managed to avoid the dark attention of Management.

Two to five people can play with one deck. In a four or five person game, it is standard for an individual to be “Promoted” to Management after they accomplish 30 points worth of Projects. However, in games with less than 4 people, this number may need to be modified. Pick an arbitrary number that works for you and then try to force your friends to that number before you. If you have more than 5 players, it is recommended that 2 decks be combined. If two decks are combined, it is suggested that a “no duplicates” rule is instituted, since there is no way that Management will accept the same excuse twice on one Project. If the Project happens to make it’s way completely around back to you, then you may play the duplicate excuse. After all, you could still have the same issue that you did the first time you got out of the Project. In any game, if either draw pile is depleted before someone wins, either (a) reshuffle the discards to form new draw piles, or (b) declare the player with the fewest Project Points the winner.